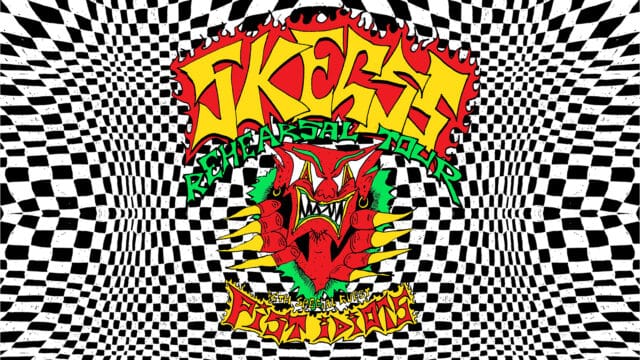 To celebrate the release of their #1 album ‘Rehearsal’, Byron Bay-based trio Skegss announce they will be hitting the road this August for a massive tour across the country.

The national tour will see the band playing their biggest venues in over two years, with performances sure to elate crowds at the Enmore in Sydney, Forum Melbourne, Fortitude Music Hall in Brisbane, Thebarton Theatre in.Adelaide, Astor Theatre in Perth and rounding out the run will be a night at The Odeon in Hobart

Rehearsal follows the meteoric DIY success of a few self-released singles/EPs (now certified Platinum in AUS) and Skegss’ 2018 debut LP My Own Mess, which snagged #2 on the ARIA Charts and was nominated for Best Rock Album at the 2019 ARIA Awards. The new album also features Hottest 100 voted singles ‘Under the Thunder‘ (#27) and ‘Fantasising‘ (#66).

Rehearsal is a 13-track thrill ride — from the playful romp of ‘Valhalla‘ and the intoxicating narrative of ‘Running from Nothing‘, to the sparse beauty of Reed’s acoustic ballad ‘Wake Up‘, Rehearsal encapsulates Skegss’ sound: nostalgic riffs, tight hooks, and masterful storytelling.

The album was recorded at The Grove Studios with Grammy-award winning producer Catherine Marks (Foals, Wolf Alice, The Wombats), who added a veteran’s finesse and expanded upon the rustic charm of demos the band tracked at The Music Farm using vintage gear from the ‘60s and ‘70s. From Reed’s self-made lyrical philosophies inspired by his favorite stand-up comedians to Toby Cregan’s reflections on life and his dog, Rehearsal is the most candid and electrifying snapshot we’ve seen of Skegss yet.